Hydrophobic or hydrophilic? Aero-gallium nitride is both

Researchers have made the first ever highly porous, mechanically flexible and stretchable inorganic nanomaterial that is both hydrophilic and hydrophobic at the same time. The material, which consists of interpenetrating hollow gallium nitride tetrapods, has similar properties to a biological cell membrane and it could find use in applications such as sensors, microfluidic devices and microrobotics.

Biological cell membranes are made up of phospholipid building blocks that both attract and repel water. Phospholipids are hydrophilic thanks to their polar phosphate group “heads” and hydrophobic thanks to their nonpolar “tails” comprising fatty acid chains.

A team led by Ion Tiginyanu at the Technical University of Moldova and Rainer Adelung of Kiel University in Germany has now made the first inorganic nanostructure with such dual hydrophobic-hydrophilic behaviour. The researchers made their material from gallium nitride (GaN), which is the second most important semiconductor after silicon. They employed an epitaxial deposition technique known as hydride vapour phase epitaxy of GaN on tetrapodal microstructured templates of zinc oxide (ZnO) to produce GaN hollow microtetrapods. These are known as aerotetrapods or aerogalnite (aero-GaN).

“We found that the GaN architecture of our structures contains a mixture of micron-scale and nanoscopic features,” explains Tiginyanu. “An individual GaN aerotetrapod in fact looks very much like an artificial pond skater when placed on the surface of water and interacts with the water in a similar way – that is, its down-positioned arms keep the tetrapod floating on the surface.”

The researchers say they weaved a waterproof raft from their material by grouping together a large number of these tetrapods. “Another animal analogy comes in useful here,” says Tiginynau, “in that the pods interact with other in the same way as fire ants powerfully grip each other during floods.” Indeed, the raft can carry liquid droplets hundreds of times heavier than itself and it boasts a durable architecture because of the electrostatic interactions between the nanoscale-thick walls of neighbouring tetrapods in the network.

“In the weaved raft, the arms of the hollow aerotetrapods become deformed, which induces electrical polarization of the walls thanks to piezoelectric and flexoelectric phenomena,” he explains.

And that is not all: the aero-GaN can also self-heal, he adds. “When we add an amount of liquid that exceeds a threshold amount, the aero-GaN raft texture generates a hole that allows part of the liquid to leak out. The raft appears to self-heal once this excess load has been removed.”

The researchers also found that when they rolled a water droplet onto a bed of GaN tetrapods, they could produce a liquid marble of GaN that covered the entire surface of the droplet. When a GaN marble fabricated using aqueous ethanol solution is placed in a Petri dish containing water, it propels itself on the water surface with a velocity as high as 750 rotations/minute.

Broadening the potential applications of GaN

The dual behaviour comes from the hydrophilic nature of the free ends of the aero-tetrapod arms, the closing plane of which coincides with the polar crystallographic c-plane of GaN, and the hydrophobicity of the external aero-GaN walls, explains Tiginynau. “This hydrophilic-hydrophobic feature of the aero-GaN allows it to skim over the surface like a flying water lily beetle, which is tethered to the water by four hydrophilic claws, the rest of its body being hydrophobic and thus repelled by the water surface,” he tells Physics World.

Our work considerably broadens the potential applications of GaN beyond its conventional use in solid-state lighting and high-frequency/high-power micro- and nanoelectronics, he adds. Energy-efficient self-propelled microelectromechanical structures, sensors, microfluids and microrobots are just some of the areas that might benefit.

“For example, energy-efficient self-propelled liquid marbles based on aero-GaN might be used to control chemical reactions in a confined space. And liquid droplets coated with aero-GaN could make bioreactors for culturing cells, especially considering the high chemical stability of GaN and its biocompatibility.” 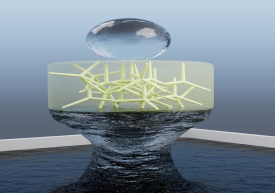